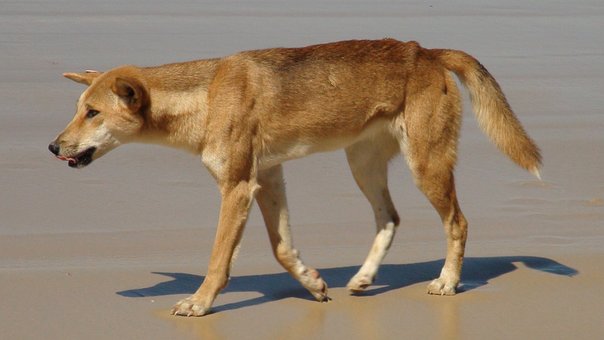 The dingo is a wild dog of Southeast Asia and Australia. It’s commonly called the Australian wild dog. They thrived upon introduction, and quickly spread out across Australia, quite possibly with individual assistance. Within a short period of time that the dingo had occupied the whole continent and became a dominant predator, probably contributing to the extinction of marsupial carnivores such as the Thylacine. Recently, the dingo has become seen as a pest species, and lots of measures, including an extensive fence, have been made to stem its encroachment on human property/welfare. Also, because of its inbreeding with dogs introduced by European settlers, the dingo gene pool is also considered to be increasingly”polluted”.

The dingo weighs between 22 and 53 pounds roughly, being usually smaller the wolves of the northern hemisphere. It stands at about 17 – 25 inches at the shoulder, and measures approximately 34 – 48 inches long. Although fur coloring differs slightly, dingoes are often ginger in colour. Although the dingo doesn’t normally occur in packs (more often existing in pairs or small family groups), it is capable of forming larger groups to search.

Dingoes predate on a variety of animals. The majority of its prey species are medium or small in size, including lizards and rodents. However, the dingo will also take larger prey, including sheep and kangaroos. The dingo is opportunistic, and in addition to hunting is also known to consume fruits and plants and scavenge from people.

Modern dingoes are distributed primarily in tiny pockets of forests in Southeast Asia and in many portions of Australia. In Australia, it occurs mostly in the north. The”Great Dingo Fence” was begun in the 1880s, and meant to keep dingoes out of the comparatively fertile southeast of Australia and to protect sheep. Although it has managed to stem the dingo from existing in larger numbers, some dingoes can still be found in the southern portions of the continent today.

Dingoes breed once annually, generally between March and June. The young may be left on their own after just a few months, or they may remain with their parents for up to a year before independence. Males reach sexual maturity by age one, and females become capable of breeding at about exactly the same age.