Bats are one of the most fascinating creatures on Earth! Not only are they the only mammal capable of true flight, they are valuable components to our surrounding ecosystem and environment. There are over 100,000 species of bat found all over the world. Although there are thousands of species, every single one can be placed under one of two groups; Megachiroptera and Microchiroptera. Continue reading to learn the difference between mega and microbats, as well as, a couple of interesting facts and characteristics to each.

Microbats, or Microchiroptera, are also known colloquially by many different names; including Echolocating bats, little bats, insectivorous bats, and accurate bats. They are most famous for their use of echolocation. Echolocation, also referred to as bio sonar, is a sonar-like method used to map a grid out of a bats’ surroundings. Although bats are not blind, like most myths imply , they require the use of such methods for finding food and hunting their prey. It operates by emitting little beeps or calls out to the surrounding environment, and listening for the return of echoes bouncing off objects around them. Various animals in the animal kingdom utilize bio sonar; such as dolphins, whales, shrews, and some cave-bird species.

Microbats are small, some as tiny as 2 grams! They have large ears, but very tiny eyes. They generally eat insects; however, larger species of Microchiroptera actually hunt small prey such as frogs, lizards, rodents, as well as fish or birds. Common species of Microchiroptera include the Spotted Bat, Bumblebee Bat, Inland Forest Bat, Leaf-Nosed Bats, Northern Free-Tailed Bat, Horseshoe Bat, and the Spear-Nosed Bat.

Megachiroptera, or megabats, are much larger than micros. They can weigh up to 4 pounds and have a wingspan of up to 5 or 6 feet! They have huge eyes, and a much wider wingspan. They are generally found in tropical climates, where the weather is moist and warm. Unlike microbats, the Megachiroptera do not use bio sonar to find and hunt for food. Insteadthey use their keen eyesight and sense of smell to find their favorites foods; such as pollen, nectar, plants, and ripened fruit. That’s right; megabats don’t eat insects or small prey like their cousins, the microbats. In actuality, megabats are often times referred to as”fruit bats” or”old world fruit bats”. 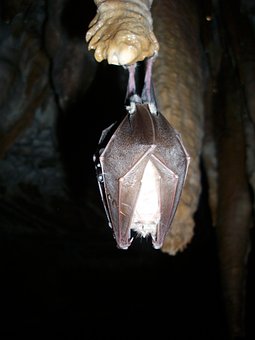 Their eating habits actually contribute to the distribution of flower pollens and fruit seeds. This relationship is a form of mutualism called chiropterophily, and clarifies how plants and bats help each other. Frequent species of Megabat include all Flying Foxes, Hammerhead Bat, Long-Tongued Nectar Bat, Egyptian Fruit Bat, and Tube-Nosed Bats.