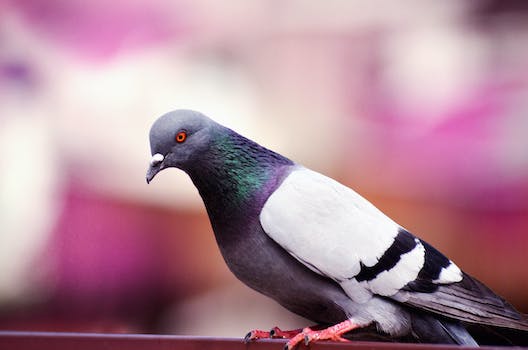 Birds are a source of entertainment for us. They fly in the atmosphere, have brighten colors that attract us towards them and they create varieties of sounds that make our environment beautiful. Birds have a number of adaptations that allow them to survive in different kinds of habitats. They are cosmopolitan and are also beneficial to the human beings in a number of ways. Pigeon is one such bird which is not only amazing in its look but is also a sign of peace. Pigeon belongs to the phylum Chordata and class Aves. Its family is Columbidae. Pigeons and doves are responsible for comprising the family Columbidae with the order Columbiformes. There are approximately 300 species of passerines are understood. In general speaking the doves and pigeons are used together for describing some of the birds. Columbidae is present throughout the world however, the major species exist in the Indomalaya and Australasia ecozones. The young pigeons are called as squabs.

Pigeons have stout bodies with short necks, having slender bills and fleshy cere. The typical species of pigeon generally available in the localities is the feral Rock Pigeon. Pigeons like to make their nests with the help of sticks and other debris which might be placed on the trees, ground and on the areas of buildings based upon the species. Pigeons lay one or two eggs at a time and both the parents take part in caring the young ones which leave the nest after 7 to 28 days after their arrival. Pigeons feed on seeds, fruits and plants. Like other birds pigeons also produce crop milk that’s secreted from the sloughing of fluid filled cells lining the crop. Both males and females are able to produce the crop milk to nourishing the young ones.

Pigeons differ in body size based on the species. The largest species of pigeons are the crowned pigeons of New Guinea that are about the size of a turkey weighing approximately 2-4 kilograms. The smallest species are the ground doves of the genus Columbina which are almost equivalent to the size of the house sparrow and weighing about 22 grams. Taxonomically the smaller species are called as doves and the larger ones are called pigeons and there are no distinguishing features between the two. Pigeons have short bills and short legs. Pigeons have large wings with powerful wing muscles containing about 31-40% of their total body weight. They’re amongst the strongest flying birds. The plumage of the family is also changeable. The species which feed on seeds are known as granivorous species and they’ve dull plumage while the species feeding on fruits are known as frugivorous and they are brightly coloured. Apart from the vivid colours pigeons also bear spotted patterns in addition to other ornamentations. Pigeons lack gall bladder.

Pigeons are found all around the world except the Sahara desert, Antarctica, its surrounding islands and the high Arctic. The pigeon colonies can easily be found around the major oceanic islands such as Polynesia and Chatham islands in the Pacific, Mauritius, Indian Ocean and the Atlantic Ocean. The pigeons are able to survive every type of habitat available in the world. The greatest number of species is found in the tropical forests and the woodlands where are accommodated to the arboreal, terrestrial and semi-terrestrial habitats. Pigeon species are also available in the temperate forests, savannas, grasslands, deserts, mangrove forests as well as the barren lands. Some species have long organic ranges also. The largest range for any species of pigeon is that of the Rock pigeon. Rock pigeon species is naturally distributed from Britain and Ireland to northern Africa, across Europe, Arabia, Orlando Animal Removal, Central Asia, India, the Himalayas and up into China and Mongolia. Domestication has a great role in the spread of this species. Currently the species is found across major regions of North America, Japan and Australia. Some species also have changed their natural habitats due to the actions of human beings too.

Columbidae is having no correlation with other bird families. The fossil records for the pigeon family is also quite limited and only one can predict that they evolved from parrot like birds on the basis of their feeding habits. The household is categorized into five subfamilies but this demarcation is inappropriate. The DNA sequencing of the members of the pigeon family also show variations among the members and provide the clue about the inappropriate classification of the family.

Pigeon and doves are consumed as food especially the stronger breast muscles are the perfect source of meat. They’re relished by the people across the planet. In Europe the Wood pigeon is the game bird and helps in earning a great sum of money. The Rock pigeon which is basically domesticated for meat is now available in various breeds today which enhance its meat worth. The Passenger pigeon is now extinct today as it had been hunted by the humans because of its meat on larger scale. The pigeons also have played a major role during the World War I and the II since the pigeons were embellished with the Dickin Medal for the people who have contributed their lives for the war. Pigeons are also considered sacred in the Bible since they are the symbols of Holy Ghost in the New Testament and were also used as offerings in the olden times of the Bible. They’re also used as the symbol of final assistance of the prophet from the Islam.

Pigeons and doves have benefited human beings since time immemorial. Some species have come on the verge of extinction because of immense shooting. Two species of pigeons such as the Dodo and the Passenger pigeons have become extinct today due to mass shooting. About 59 species of pigeons and dove are under the category of threatened species. The Polynesian ground dove is an exceptionally badly endangered species. Various schemes are under progress to save these endangered species from extinction.